Determination of solids and liquids density is an inseparable element of work in many laboratories. The traditional method requires many measurements and calculations from the operator. Use of weighing instrument offering density determination function, and equipped with density determination kit for solids and liquids, significantly shortens and simplifies the whole process. The operator performs manual activities only, e.g. he (she) operates keypad, loads the weighing pan with samples, hangs the sinker. Density determination is carried out automatically by the software, the result is presented on the weighing instrument screen and the obtained report can be printed.
RADWAG introduces a new set of weighing pans for testing granulate of density higher or lower than 1 g/cm3. The set consists of an upper weighing pan, a rigid string and the lower weighing pan in the form of a closed (limited) space where tested sample is placed.
Granulate density determination kit is intended for cooperation with laboratory balances equipped with ø85 or ø100 mm weighing pan (KIT 85).
Produktname
Beschreibung 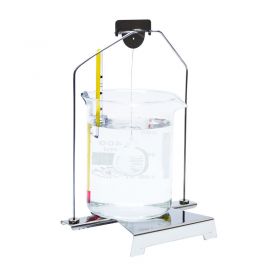